When running a job that has over 1,700 models, how do you know what a “good” runtime is? If the total process takes 3 hours, is that fantastic or terrible? While there are many possible answers depending on dataset size, complexity of modeling, and historical run times, the crux of the matter is normally “did you hit your SLAs”? However, in the cloud computing world where bills are based on usage, the question is really “did you hit your SLAs and stay within budget”?

Here at dbt Labs, we used the Model Timing tab in our internal analytics dbt project to help us identify inefficiencies in our incremental dbt Cloud job that eventually led to major financial savings, and a path forward for periodic improvement checks.

The dbt Labs internal project is a beast! Our daily incremental dbt Cloud job runs 4x/day and invokes over 1,700 models. We like to sift through our dbt Cloud job using the Model Timing tab in dbt Cloud. The Model Timing dashboard displays the model composition, order, and run time for every job run in dbt Cloud (for team and enterprise plans). The top 1% of model durations are automatically highlighted, which makes it easy to find bottlenecks in our runs. You can see that our longest running model stuck out like a sore thumb -- here's an example of our incremental job before a fix was applied:

As you can see, it's straightforward to identify the model that's causing the long run times and holding up other models. The model fct_dbt_invocations takes, on average, 1.5 hours to run. This isn't surprising, given that it's a relatively large dataset (~5B records) and that we're performing several intense SQL calculations. Additionally, this model calls an ephemeral model named dbt_model_summary that also does some heavy lifting. Still, we decided to explore if we could refactor this model and make it faster.

After refactoring this code, we ended up swapping the ephemeral model dbt_model_summary to an incremental model that took the bulk of the processing out of the main fct_dbt_invocations model. Instead of recalculating this complex logic every run, we pull only new data and run that logic on the smaller subset of those records. The combined run time of the new dbt_model_summary and fct_dbt_invocations is now ~15-20 minutes, a savings of over an hour per run!

This project runs on Snowflake, so all the examples below show the Snowflake UI. However, it is possible to do a similar style of analysis in any data warehouse.

Also, this blog post represents a pretty technical deep dive. If everything you read here doesn't line up immediately, that's ok! We recommend reading through this article, then brushing up on cloud data warehouses and query optimization to help supplement the learnings here.

Finding this long running query was step one. Since it was so dominant in the Model Timing tab, it was easy to go straight to the problematic model and start looking for ways to improve it. The next step was to check out what the Snowflake query plan looked like.

There are a few ways you can do this: either find the executed query in the History tab of the Snowflake UI, or grab the compiled code from dbt and run it in a worksheet. As it’s running, you can click on the Query ID link to see the plan. More details on this process are available in your provider’s documentation (Snowflake, BigQuery, Redshift, Databricks).

Below you can see the query plan for fct_dbt_invocations, which includes the logic from dbt_model_summary: 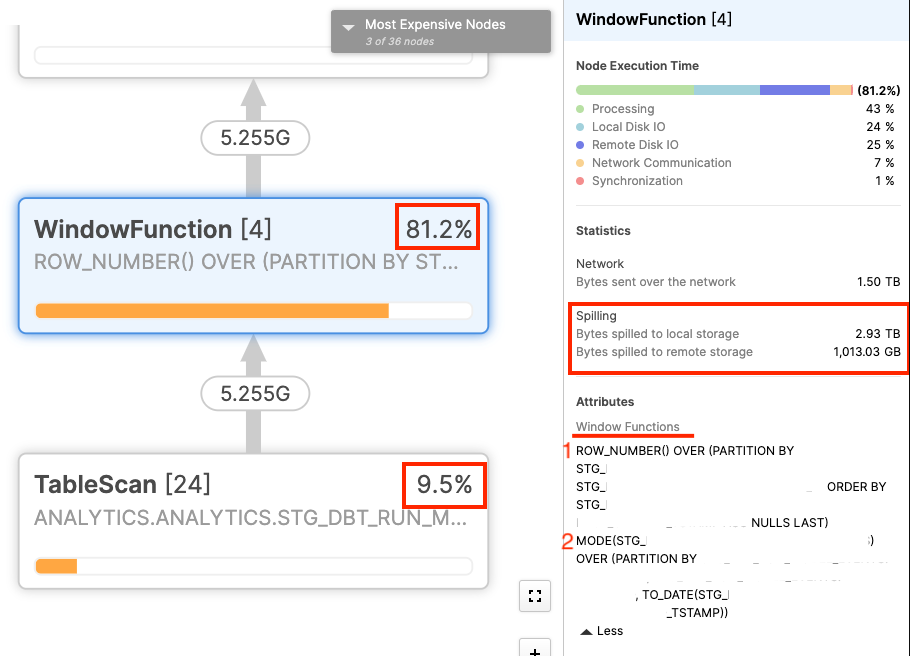 From the query profile, it was easy to find the issue. There are two window functions that account for over 90% of the run time when we factor in the table scan needed to retrieve the data. Additionally, there is nearly 1TB worth of data that is spilled to remote storage as part of this query. Within Snowflake, remote storage is considerably slower to both write and read from, so any data that’s on the remote drive will really slow down a query. We’ve found the problem!

Once we identified the issue, we had to find a way to fix it.

First, it’s good to have a high level understanding of the underlying data for fct_dbt_invocations. Any time you issue a command to dbt (run, test, build, snapshot, etc.), we track certain pieces of metadata about that run. We call these “invocations,” and as you can imagine, dbt is invoked a lot. The table this query is running against is filtered, but still has somewhere in the neighborhood of 5 billion rows. The relevant pieces of data that we are using in this query include project IDs, model IDs, and an anonymized hash key representing the raw model contents to know if a model changed.

If you’re curious, here’s a look at the query for dbt_model_summary before any changes were made:

The window functions referenced above are answering the following questions:

Attempt #1: Optimizing our objects and materializations​

Given the size and complexity of this query, the first few approaches we took didn’t focus on changing the query as much as optimizing our objects and materializations.

The two window functions (row_number() and mode() in the diffed CTE above) were in an ephemeral model which isn’t stored in the data warehouse, but is instead executed in-memory at run time. Since it was obvious our virtual warehouse was running out of memory (remote storage spillage), we tried swapping that to a view, then a table materialization. Neither of these improved the run time significantly, so we tried clustering the table. However, since our two window functions are at different grains there wasn’t a great clustering key we found for this.

Attempt #2: Moving to an incremental model​

The final strategy we tried, which ended up being the solution we implemented, was to swap the ephemeral model (dbt_model_summary) to an incremental model. Since we’re calculating metrics based on historical events (first model run, most frequent model run today), an incremental model let us perform the calculation for all of history once in an initial build, then every subsequent build only needs to look at a much smaller subset of the data to run it’s calculations.

One of the biggest problems with the ephemeral model was remote spillage due to lack of memory, so having a smaller dataset to run the calculation against made a massive impact. Snowflake can easily calculate a daily mode or a first model run when we only had to look at a sliver of the data each time.

Swapping from ephemeral to incremental can be simple, but in this case we are calculating at two grains and need more than just the data loaded since the prior run.

This let to slightly more complex logic in the model, as you can see below:

The astute reader will notice that the entire new_models CTE is wrapped in an {% if is_incremental() %} block. That’s because when the model is ran incrementally we need the full history of model runs for the given model. This means we have to join back to the main table to get that full history. However, when we’re running this as a full refresh (or on the initial load), we already have the full history of runs in the query, so we don’t need to join back to the table. This additional piece of {% if is_incremental() %} dropped the full refresh run time down from over 2 hours to just under 30 minutes. This is a one time savings (or however often we have to full refresh), but is well worth the slightly more complex logic.

A major challenge in testing and implementing our changes was the volume of data needed for comparison testing. Again, the biggest problem we had was that our virtual warehouse was running out of memory, so trying to do performance testing on a subset of the data had misleading results (our testing was a subset of 10 million records). Since this query runs just fine on a small set of data (think the incremental runs), when we were initially trying to performance test the new vs old it looked like there was no real benefit to the incremental model. This led to many wasted hours of trying to figure out why we weren’t seeing an improvement.

To start with, we cloned the entire prod schema to a testing schema, which is a free operation in Snowflake. Then, we did an initial build of the new dbt_model_summary model since it was switching from ephemeral to incremental. Once that was complete, we were able to delete out a few days worth of data from both dbt_model_summary and fct_dbt_invocations to see how long an incremental run would take. This represented the true day-to-day runs, and the results were fantastic! The combined run time of both models dropped from 1.5 hours to 15-20 minutes for incremental runs.

Benefits of the improvement​

The end result of this improvement saves a nice chunk of change. Since this query was running 4 times per day and took 1.5 hours per run, this change is saving roughly 5 hours per day in run time. Given that this on Snowflake, we can calculate the savings based on their public pricing. Currently for the Enterprise edition of Snowflake it costs $3/credit, and a medium warehouse consumes 4 credits/hour. Putting this all together, that’s a savings of ~$1800/month.

The cost savings are great, but there are two other “time based” benefits that come from faster runs:

Developing an analytic code base is an ever-evolving process. What worked well when the dataset was a few million records may not work as well on billions of records. As your code base and data evolve, be on the lookout for areas of improvement. This article showed a very specific example around two models, but the general principals can be applied to any code base: